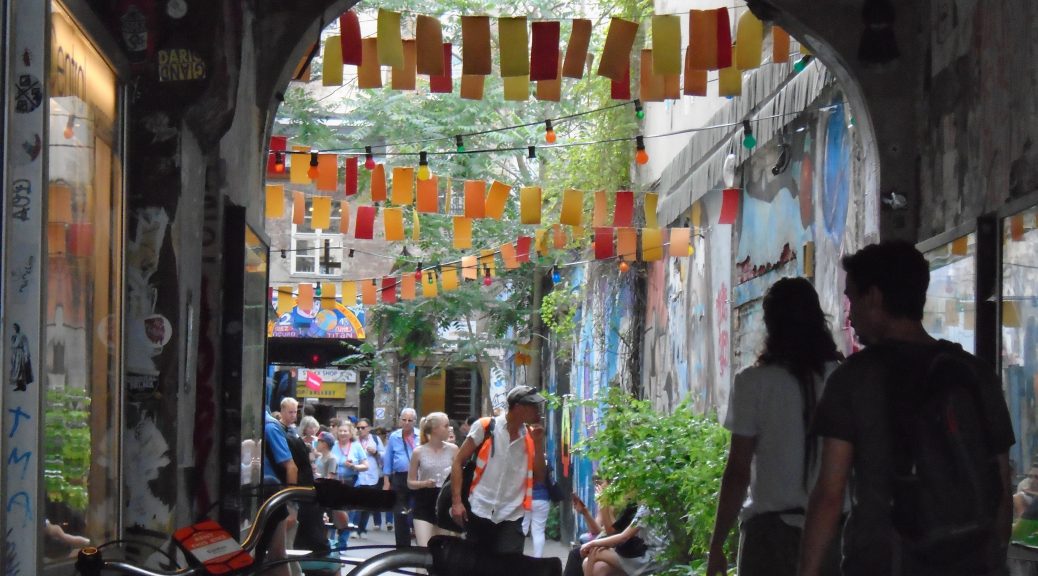 When I first heard about the Monster Kabinett, I knew it was something that I had to visit. I found it mentioned on several lists of unusual attractions in Berlin, described as “part art installation, part haunted house”. I knew full well that it could end up being a tourist trap, but I have a soft spot for those kinds of places. Whether the Monster Kabinett turned out to be an impressive experience or a kitschy gimmick, I thought I’d get something out of the experience. It turned out I was right. The Monster Kabinett is not easy to find even if you know where to look for it. It’s set far in the back of a graffiti-coated side alley, behind several little dingy bars and cafes, and there are no signs anywhere to indicate where it is until you are right on top of it. Even so, there were probably about eight other people waiting for the show to start when my husband and I arrived. We each paid the admittance fee and were handed little generic pink tickets, the kind that you typically see at carnivals and county fairs. We didn’t have to wait long before the guide made a loud announcement that the tour was about to begin.

Our guide told us that photos were not allowed during the show, but we would have a chance for pictures at the end of the tour. It turned out that we weren’t actually given a photo opportunity, possibly because our guide forgot to give us one. It’s okay though, you can find photos of the creatures in the Monster Kabinett with a quick web search if you are curious. However, if you ever plan to visit for yourself, I suggest going in blind and allowing yourself to be surprised. If you don’t want the experience spoiled for you at all, you can skip to the last paragraph and read my final thoughts on the attraction. I can’t promise that I remember everything perfectly since the whole thing was extremely bizarre, but I’m going to do my best to recollect the details to the best of my ability.

The Monster Kabinett turned out to be a collection of robotic monstrosities, each emerging out of near darkness as the guide introduced us to each one by one as he led us deeper into the building. Each of the creatures was unlike anything I have seen before, and I find it difficult to even describe them. Each was large, and most made considerable noise from the creaking of their metal parts. Some looked like they were assembled from scrap metal found in a junkyard. Others looked more organic and fleshy. I won’t write out everything I saw here, but here are the highlights:

Our tour guide for the experience was a wiry man who radiated frenetic energy and seemed just a little bit unhinged. I wondered if he was the creator of what we were about to see since he seemed so passionate about his “monster friends” and about how each of them had a soul. After collectively yelling to wake up the monster guardian who watched over the door, we were greeted by a giant walking arachnid type beast who tried to charge at us while the guide did his best to “calm it down”. I think it might have been supposed to be scary, but I actually found it kind of cute. It was kind of like a dog owner trying to get his hyperactive golden retriever to settle down and stop jumping on the guests. Afterward, there was a six-legged duck thing with a rotating lower body, and the guide encouraged us to cheer her on as she hatched an egg on top of her head that revealed a baby monster inside. There was a pair of lips with googly eyes that bopped around to flashing lights and techno music, lunging at the guests who had to move out of the way in order to avoid getting kissed. Before we could enter into a dark forest of trees constructed of metal pipes a little farther on, we first had to watch the unsettling movements of “Mr. Four-Eyes” as he performed his welcoming ritual with beating drums and chiming bells. Beyond, there was a creature with something like a plunger for a face who did a frantic tap dance while occasionally making loud honking noises and clashing together cymbals. The last monster of the tour had a room all to itself, lined floor to ceiling with mirrors and smelling like musty rubber. The creature was a towering creation with three wide-mouthed heads that moved on long necks independently of one another, each singing in a different voice along to the eerie music that blared through the room. I admit that the spectacle was very visually impressive, but it went on a little too long and left me feeling disoriented. In the end, all the monsters gave one last hurrah and we all stumbled back out to the entrance. There, a  woman tried to sell us calendars featuring pictures of painted people wearing funny hats posing outdoors as well as some screen printed t-shirts with some kind of stylised vulva pattern.

All in all, I think it was worthwhile to visit the Monster Kabinett, though I have a hard time knowing who to recommend something like this to. It has a whimsical imaginative feel, but I think it would be far too dark and scary for most children. People who appreciate modern art might like it, but some might be put off by the loud noises that the monsters make and the few jumpscare moments. Even though the whole thing is creepy and unsettling, I wouldn’t recommend it for people looking for a serious thrill since it isn’t too heavy on the horror elements and isn’t likely to scare you too badly. I guess the Monster Kabinett is for people like me- people who enjoy weird things and just want to see something unique, but don’t have sky-high expectations and can go with the flow. It feels a lot like I imagine one of those old-timey P.T. Barnum sideshow attractions and freakshows would feel. Curiosity and the promise of a thrill urge you on to spend perhaps a little bit more money than the attraction is really worth, all so you can gawk at something strange and secret hidden away from the public eye. Even though I enjoyed my time there, I don’t think I will feel the need to visit again. The tickets were rather expensive at 8 euros for a 20 minute show, when you consider that you can pay around 10 euros to see masterpieces of art and marvels from the ancient past at one of Berlin’s many museums and galleries. So, in short, the Monster Kabinett is worth a try if you want to see a piece of the darker, edgier side of Berlin’s art scene or if you just really like weird robots.